One woman saw the future, but, when she got there, something important was missing…

When people call on a psychic more than once, they fail to realise that ‘knowing the future’ is not actually providing them with any answers. One woman, Janine, told me how she finally awoke, and gained precious wisdom.

Janine (not her real name) was a regular customer of a psychic who had become almost a friend to her. She called the psychic mostly for comfort: to see if things would be ok if she did one action and not another, or to confirm whether one action or another would affect her finances for good or ill.

However, because her mind was a whirlwind most of the time, Janine couldn’t remember whether or not the guidance she received from the psychic was sound. She told me she may have sometimes acted on the psychic’s advice and at other times followed her own feelings. But one advice she could not forget was regarding a major decision: a job offer.

“This psychic was different: she would make the choice for me”

“Most psychics I’d spoken to were not only less accurate than this one, they would also say, rather self-righteously I thought at the time: ‘I can show you the options, but I can’t make the choice for you.’ This psychic, though, confidently offered her recommendation for one option over the other. I had suffered a terrifying period of unemployment, so when I was suddenly offered two excellent but very different jobs, I asked the psychic her opinion, and she told me.

“But, here’s the thing: I was naturally, and quite strongly drawn to the other one. However, although it was a far higher paid role, it did not offer the flexibility I needed to fit around my two young children. The job the psychic preferred offered a wonderful change in lifestyle that suited me perfectly. It also offered a less male-dominated environment than what I had been used to in previous roles. Her choice seemed to be the right one for all these reasons, so I decided to go with it,” said Janine.

Crunch time came when Janine had to turn down one employer. Before speaking to the company, she was counselled by a friend to find out more about the role and remuneration package, to extend her exploration of the option. But, preferring to put her faith in her psychic’s seeing than her own feelings, and eager to put an end to the indecisive situation, and to avoid negotiations, which Janine found uncomfortable, she straight up told the employer that she did not want their job. The deal was sealed.

Over the next two or three months, however, Janine was to find out several discomforting things about her new job.

The psychic had rightly seen that the company’s culture appeared fun, friendly, and carefree. It was also majority female. But, within weeks, the culture of the company, so amiable on the surface, turned out to be more akin to Fagin’s den, replete with its own version of Sikes and Nancy.

The Sikes character made an underhand jibe at Janine the first time they met, and Nancy soon started to bully Janine. Soon, another woman and then another joined in with the game. Janine stayed away from the office as much as she could, working remotely at ‘meetings’ and making other excuses. Janine found that her payslip was constantly wrong, and she was forced to raise this uncomfortable inadequacy to the company’s management time and time again.

“At this point, I turned to God. I needed that level of succour. I was drowning”

Janine told herself to look at the big picture, to take into consideration the other perks for which she had taken the job. But getting up in the morning became ever more difficult. She began to put on weight. She started to feel desperately unhappy, and even insecure. She could not stop worrying about money and her future.

She said: “Tellingly perhaps, I did not contact the psychic at this point. I turned to God, to prayer. There were no more answers any person could give me. I was drowning in anxiety. I had to find Spirit, the greater world Spirit, the highest truth and goodness of myself, of the universe. I needed a level of succour that I knew nobody but myself could possibly give me.”

And then, one morning, Janine’s manager called her. Janine was to be made redundant, effective immediately. A reorganisation of the company’s operations meant her role was no longer required, she was told.

“A small part of my brain was in denial: the message was exactly opposite to the line I’d been sold on joining: that there were numerous excellent opportunities available in a young and growing company. But the majority of my mind was unsurprised, as if the news confirmed what it already knew.

“Later that day I remembered an incident from two weeks previously. One morning after waking up I had an almost overwhelming mental ‘impression’ – like a cymbal crashing onto my head. And in that noise I heard the words: ‘This job will be over before six months is out.’ I put the experience aside as a symptom of stress. In fact, it was my own intuition telling me, warning me of the future,” said Janine.

Surprisingly, the effect of the news was a huge relief to Janine. A smile surfaced on her face, and she lost the heavy rumpled forehead that had become her normal – and exhausting – expression since starting work at the company.

“The cards seem to be right, but then they’re also wrong”

Janine’s experience is not unique. A gifted psychic confirmed to me that the contradiction is inherent to her profession and she has faced it more than once.

She said: “The cards seem to be right, but then they’re also wrong”; and related one of her own clients’ experiences, similar to Janine’s.

“What I couldn’t see,” said the psychic, “was how she’d behave once she was in the situation I saw for her. Her behaviour changed the whole thing from good to bad.”

Whether or not the client’s behaviour was responsible for turning the ‘good’ situation the psychic had seen into a ‘bad’ one, is uncertain, but it is certain that the psychic was unable to see how her client and the event coming her way would interact. She knew they’d meet, but was unable to see that they would collide.

All this demonstrates how much more complex the universe is than our behaviour in and towards it would suggest, and how much more uncontrollable it is too. In the words of Shakespeare’s Hamlet: “There are more things in heaven and earth, Horatio, than are dreamt of in your philosophy.”

However, this complexity could be seen as a saving grace. It means that our choices are not entirely governed by visible (or psychically seen) facts. It should come as a relief that we are not solely responsible for everything in our lives. There are hidden forces, unseen laws of existence, which are at play too. We can safely say to ourselves: ‘Do your best, then relax.’ Or as the Bhagavad Gita says: “Do your duty and leave the fruits to God.”

It is wonderful, too, that the future is not set in stone. If it was, fortune tellers and not our own hearts would rule our lives – we would effectively be robots, automatons, not humans with living, creative, growing spirits with infinite, untold potential.

To be able to see the future in all its details would rule out progress and personal growth.

So it could be said that the darkness hiding the future from us is an essential part of planetary or existential design. To see the future in all its details would rule out the evolutionary process of consciousness (and of physical things too if their evolution is ultimately dependent upon consciousness).

It is probable, then, that it is impossible for the future to be perfectly seen. Because the unfolding of the universe and the development of life on earth depend on the immediate, moment to moment behaviour of consciousness – be that consciousness dressed up as the animal mind, or as Nature-intelligence exhibited in the movements of a tendril.

We speak to psychics for comfort, but comfort is not the same as infallible guidance

The evolving, progressive life of earth is not in nature the equivalent of building a house or a fridge. It is a complex, living, expanding organism, which grows through infinite interactions between untold numbers of complex organisms. And those interactions cannot be wholly predicted because the choices available to them are infinite as well as freely chosen, both in the moment and for all moments to infinity.

People think the reason why they speak to psychics is the need to know how to prepare for whatever’s round the corner in their lives. But the more likely reason is that they want to feel happy. And that often comes not from knowing the future, but from the psychological comfort psychics – much more so than non-psychic therapists or counsellors – are able to give to those who believe in them. This is because psychics are energy workers, and, if not all of them, a good number have an energy healing capacity.

So, when it comes to moving through a difficult, uncertain time in life, the best and only certain way, is to follow our own selves – our gut feelings, our Spiritual Self, God, or intuition. One or all of these. And at all times. As Janine found out: essential information about our present and our future is held within ourselves.

To consult the inner psychic has the advantage of being always on tap, entirely free of charge. It is the inner intelligence that can guide infallibly. Rejection of it is likely to result in uncertain, unpalatable outcomes, and rude awakenings.

The moral of this tale? ‘Trust Self or God, no other’.

Which brings us full circle to the most ancient wisdom of the world, neatly summed up in words attributed to the ancient Greek philosopher Socrates: “Know thyself”.

And, if I may, a few last wise words from Shakespeare: “To thine own self be true”.

(Information on featured images is below) 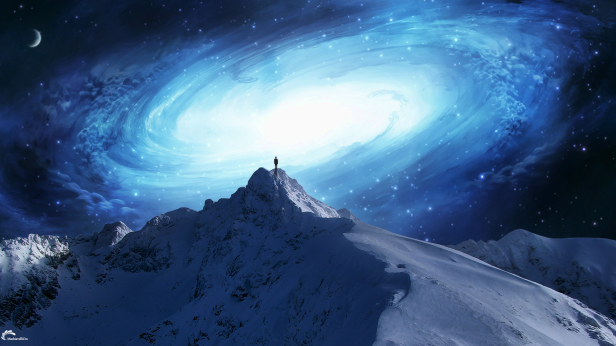 1. “The Allegory of Melancholy” by Lucas Cranach the Elder, re-imagined by Raqib Shaw      More on the artist, here: https://en.wikipedia.org/wiki/Raqib_Shaw

2 thoughts on “If you could see the future, would it help?”